This is a module for use with the MOSAIC Strict framework, it isn't a playable game itself but an optional short bundle of mechanics that can be included with other MOSAIC Strict modules to compose a tabletop roleplaying game.

This module is a character system, a set of rules that document and communicate the gist of what a character is about in a way that guides and interacts with your roleplaying. It includes procedures for character generation, either by the player who will play the character or for pre-generating characters.

Hello! I absolutely love this module! It really helps players think about their character in layers so they have a coherent whole. Thank you!

I'm not sure if it's a mistake or if I've misunderstood the design, but in the Reflection section it says you should look at the positive aspect if the knack was used and the negative if it wasn't. I thought it'd be the other way round (the positive aspect won put so you assess the negative) as won't this way mean that the answer is usually "yes the aspect has shown up in play"?

Regardless, this is a fantastic module and the first mosaic strict module that I'm going to bring into every game I play. Thank you!

Thank you for the kind comment! On the issue of the polarity of the answer and which aspect to focus on, I think they are both interesting. The way it's designed in the module, the focus is a little more on the situation where a character does something familiar but the prompt gets them to consider if they're doing it differently or for a different reason. The way you thought it should work is a little more focused on using whether or not they've done an action to draw attention to the fact that elements of their character may have changed. I think the way you propose might be a little more conducive for a "dramatic" style of play where characters change more across the course of play, while the way I originally designed it expects the characters to be somewhat stable and invites players to contemplate the nuances around subtle variations around a steady central theme. Honestly, before you asked the question I hadn't really considered doing things the way you propose, the way I originally came up with seemed to fit well enough to me that I didn't consider doing the opposite. I think the way I did it originally still makes more sense to me, but the way you thought it should work seems like it could be a cool and interesting variant.

Woah, thank you! That's a really insightful and interesting reply. You're right, the way I suggested would lead to characters shifting pretty regularly as their aspects are changed when not used, whereas I can totally see how your rules as written help the players really internalise the driving forces of a character which would definitely help them jump off from the character sheet. Once you've really understood the aspects, I bet it really helps play move outside the box whereas the rule I assumed would very much keep players in the "hmm I'll check my character sheet" style of play as the aspects would be shifting so often. Oof, game design is a brain-melter I've no idea how you do it.

Thank you for such a clear explanation and for how quick it was, too! I'll definitely pass this module around and check out your other work! 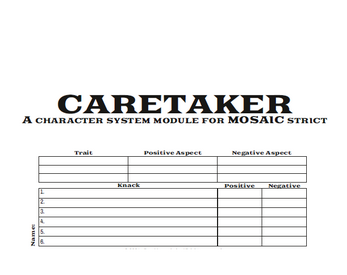